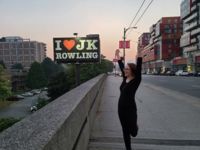 We are writing to express our concern at news you are "investigating" nursing member Amy Hamm for her personal views at the command of a gender ideologue who complained that Amy's posts on twitter and her involvement in a billboard in Vancouver that stated "I [heart] JK Rowling" are somehow offensive. Bowing to a group that is incensed at the support of a beloved children's author because of some perceived thought-crime having been committed is inappropriate, if not outright harassment. Amy is an upstanding citizen and feminist activist who has committed no crime and you should be protecting her from these malicious attacks against her character and profession.

Amy has the right to freedom of belief, thought, and expression as provided in the Charter of Rights and Freedoms and censuring her for her political activism, not to mention compromising her reputation and career is unacceptable. If anything, her position makes her better able to provide care. At no time did she claim to represent your organisation or her employers and her statements on social media were made in her personal capacity.

There is no reason that a healthcare professional should be punished for defending women's sex-based rights or for acknowledging that biological sex exists. The alternative is actually incredibly dangerous, and opens doors for legal liability should anything happen to a trans or "non-binary" identifying individual. If a regulatory body cannot concede that biological sex is material and relevant to healthcare, what does that mean for healthcare as a whole?

By accepting and proceeding with "investigating" the "complaint" your institution becomes complicit in intimidation, the violation of Amy's Charter-protected rights, and emboldens other vexatious complaints against other rational women who already face harassment and threats of violence for their fact-based positions.

We encourage you to recognise that Amy has done nothing wrong, dismiss this complaint as the harassment that it is, and issue a public apology to her for the stress and embarrassment that this political performance has caused.