On Sunday, May 2, 2021, we joined various women's groups in Canada, including WHRC Canada, Alberta Radical Feminists, and caWsbar (Canadian Women's Sex-Based Rights) and took to the grounds of the Alberta Legislature to hold a protest.

What follows is a transcript of Kathleen Lowrey's remarks!

A video of this speech and those of the other speakers is available on our facebook page!

Kathleen Lowrey is an Associate Professor of Anthropology at the University of Alberta. Reading Gallus Mag's website is what raised her consciousness about gender ideology, starting around 2014-2015. She published her first piece about these issues on Feminist Current in 2018. In 2020, student objections to her feminist views led to her dismissal from an administrative post within the U of A. She does not recant. She's unfortunately not here to speak in person today, but here is a recording she sent us for today's event. 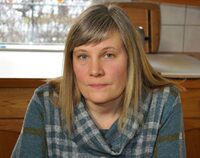 Hello, rebel women. I salute you.

I wish I were standing shoulder to shoulder with you today. All week, I've been thinking of a modified version of Shakespeare's famous line from Henry V: "We few, we happy few, we band of sisters," though advance word was that we might not be so few after all today. Whatever our number, we are few in comparison to how many we're going to become.

Today is an important day in the history of Alberta feminism, Canadian feminism, and world feminism. In the fact of your presence, you're each a manifestation of the renewal of feminist political action in the 21st century.

This renewal is taking place because it is desperately needed. We've watched in horror and disbelief as right we considered safe have collapsed and people we considered allies have turned on us, but we're no longer gasping for breath at the swiftness and sheer aggression of these reversals. We're clear-eyed about what is at stake and we understand that this fight is going to be long, fierce, and still for some time to come, lonely. And yet, I think I speak for all of us in saying that we are excited and full of courage, full of solidarity, and above all full of hope about feminist political action.

Say what you will about gender identity ideology and transactivism, they remind us very starkly of why feminism exists. If womanhood is an arbitrary social category that anybody can sign up for for kicks, feminism is ridiculous and unnecessary. If, on the other hand, womanhood is both a material fact of life and source of vital power, having an analysis of the control and exploitation of women is fundamental and liberatory. It's why feminism exists.

Gender identity ideology and transactivism have dragged us onto such absurd terrain, they've reminded us of some elementary principles. They've prepared us to return with renewed clarity to other kinds of unfinished feminist business. These are the fight against pornography, the fighting against the prostituting of women and children, and the fight against surrogacy. I think the gender ideology fight is, in the long run, a mere preamble. The assertions of transactivism are silly and unsupportable and the public is increasingly saying so too.

Resistance to one mode of male aggression leads inexorably to other resistances. That's why we face so much ferocious opposition for asserting common sense on gender identity ideology. But it's also why we're finding so many women swelling the ranks of feminist political action these days. They see what we see. They're making the connections we're making.

So let me close with this: here's to you, my dear sisters, and here's to the sisters who will be joining us in the months and years to come. We are on the march. Thank you.